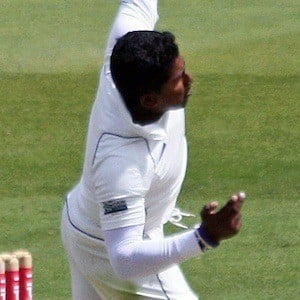 Renowned left-arm orthodox bowler known for his play with the Sri Lankan national team, particularly in Tests. With more than 400 career wickets, he set a world record for most wickets taken by a left-arm spinner.

He began his first class career at the Kurunegala Youth Cricket Club during the 1996-97 season. He made his Test debut against Australia in 1999.

He led Sri Lanka to their first-ever ICC World Twenty20 title in 2014.

He married a woman named Senani.

He and Muttiah Muralitharan are considered two of the best bowlers in Sri Lankan history.

Rangana Herath Is A Member Of