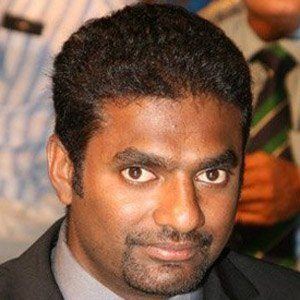 Cricketer from Sri Lanka who played internationally from 1992 through 2011 and is widely considered one of the great bowlers ever to play the game. The Wisden Cricketers' Almanack named him as the best Test bowler of all time in 2002.

He was the Bata Schoolboy Cricketer of the Year with St Anthony's College.

He was the Wisden Leading Cricketer in the World in 2000 and 2006. He recorded 800 career Test wickets, taking number 800 on the last delivery of his career.

He has a child named Naren with Madhimalar Ramamurthy.

He and Glenn McGrath were both crowned as the Wisden Leading Cricketer in the World during their careers.

Muttiah Muralitharan Is A Member Of