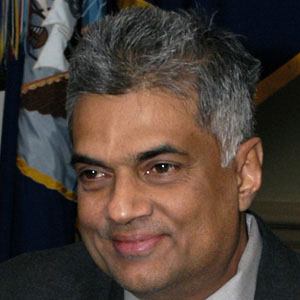 Affiliated with the United National Party, he was a two-term Sri Lankan Prime Minister (from 1993-1994 and 2001-2004). Before leading his country's government, he served as a Colombo constituency representative in the Sri Lankan Parliament.

After graduating from Royal College, Colombo, he studied law at the University of Ceylon.

During his second term as Prime Minister, he clashed with Sri Lankan President (and former Prime Minister) Chandrika Kumaratunga, who belonged to the opposing political party.

His wife, Maitree Wickramasinghe, taught English at the University of Kelaniya.

He and fellow politician T.B. Ilangaratne both served as Prime Minister of Sri Lanka.

Ranil Wickremasinghe Is A Member Of