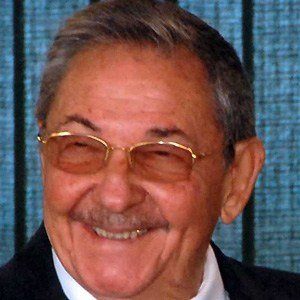 Cuban politician and revolutionary who became the President of Cuba in 2008 after the death of his brother Fidel Castro. In 2017, after Donald Trump was sworn in as the President of the United States, Castro became a vocal critic of Trump's policies.

He was a member of the 26th of July Movement in 1958 that attacked the Moncada Barracks, and he spent 22 months in prison as a result of this and was exiled to Mexico.

In 1959, after his brother's army took Cuba, he was responsible for overseeing the summary execution of scores of soldiers loyal to deposed president Batista.

He married Vilma Espín on January 26, 1959. They have three daughters and one son together: Déborah, Mariela, Nilsa, and Alejandro.

He took office as President after his brother, Fidel Castro, fell ill.

Raul Castro Is A Member Of