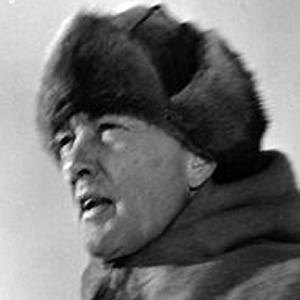 Polar explorer who took part in six of America's twelve expeditions to the Antarctic.

He learned to fly while serving in WWI, and became a skilled pilot.

He was the first to a attempt a flyover of the South Pole, and claimed he carried it out, although later there were some doubts.

A descendant of the American Founders, he could trace his ancestry back to John Rolfe and Pocahontas.

He was a part of the first Americans expedition to reach the South Pole since Charles Wilkes, who landed a century earlier.

Richard E. Byrd Is A Member Of