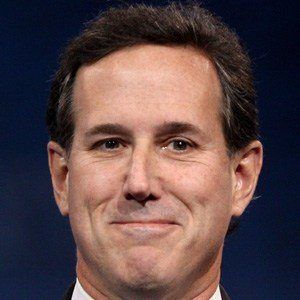 Pennsylvania senator from 1995 to 2007 who was candidate for the Republican presidential nomination in 2012. He is known for his staunchly conservative family values and his penchant for sweater vests.

He was a dark horse candidate in his first political race for the House of Representatives, and to the surprised of everyone won.

He was an outspoken opponent of gay marriage, which prompted gay rights activist Dan Savage to redefine the senator's last name into an unprintable definition.

He had seven children with wife Karen Garver, whom he married in 1990.

He and his family went on the late-night talk show Piers Morgan Tonight in January of 2012.

Rick Santorum Is A Member Of