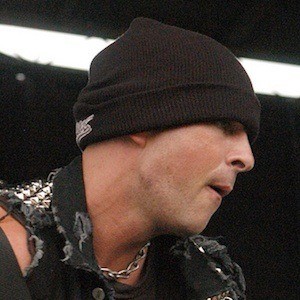 Well known by his stage name of Skinhead Rob, he is a rap artist and founded member of the group the Transplants. He would also perform as a lead vocalist for a punk band called Death March, and a hip hop group called Expensive Taste.

He was a roadie who would follow the bands BootParty, AFI and Rancid. His debut solo song was called "Show Me."

He was credited as a background vocalist on Death by Stereo's third album Into the Valley of Death. He received the same credit on Travis Barker and Yelawolf's collaborative EP Psycho White.

He sang about his sister on the track "Red Hot Moon" from Rancid's album Indestructible.

He first became involved with the Transplants after Tim Armstrong asked for lyrics to the songs he had been writing.

Rob Aston Is A Member Of