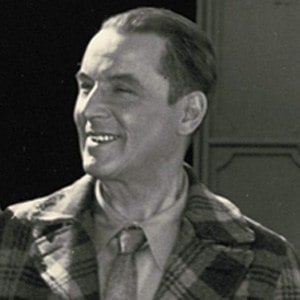 British-born poet who wrote "The Shooting of Dan McGrew," "The Cremation of Sam McGee," and "The Call of the Wild." His poetry collections include Songs of a Sourdough and Rhymes of a Red Cross Man.

He grew up with nine siblings in Lancashire, England and Glasgow, Scotland. He moved to Canada in his early twenties.

He spent the World War II years in Canada and America and avoided Nazi officials who tried to hunt him down for his literary mockery of Hitler.

He was married to Germaine Bourgoin, and he was the father of a daughter named Iris.

His dreams of a cowboy life attracted him to the western frontier of Canada; he aspired to be a Yukon territory version of Buffalo Bill Cody.

Robert W. Service Is A Member Of