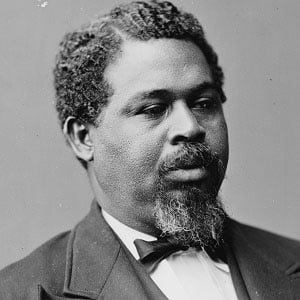 Remembered for an American Civil War-era act of bravery in which he took over a Confederate vessel (the CSS Planter) and sailed himself and several other enslaved people to freedom in the North, he is also notable for his post-war political career.

During his late childhood and early teenage years, Smalls (who was, at the time, still in slavery) learned the rigging and sail-making trades. It was through his dockside and sailing work that he eventually managed to commandeer the CSS Planter.

During the 1880s, he represented South Carolina's fifth and seventh districts in the United States House of Representatives.

The son of Lydia Polite, he spent his youth as a slave of Beaufort, South Carolina plantation owner Henry McKee. Smalls' marriage to Hannah Jones began in 1856 and produced a daughter named Elizabeth and a son named Robert, Jr.

During the Civil War, he provided important intelligence to the Union Navy and received a prize of over $1,000 from President Abraham Lincoln for his successful takeover of the CSS Planter.

Robert Smalls Is A Member Of