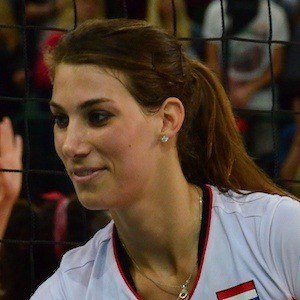 Volleyball player who has won multiple league titles as a middle blocker with clubs like Dresdner SC, River Volley and VakifBank Istanbul. In 2016, she won bronze at the FIVB Volleyball World Grand Prix while competing for the Dutch national team.

She grew up in Schalkwijk, Netherlands and made her debut with the Dutch national team at age 17.

She was named Netherlands Player of the Year in 2015.

She has two younger brothers. She has been in a relationship with Brazilian volleyball player Levi Alves Cabral.

She and Kim Hill both competed in the 2016 FIVB Volleyball World Grand Prix.

Robin de Kruijf Is A Member Of