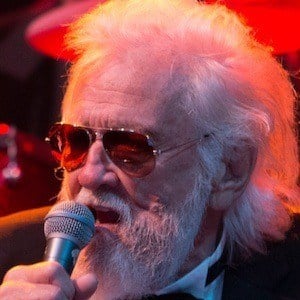 Musician in the rockabilly genre who founded a band called Ronnie Hawkins & The Hawks. He received several awards for his music, including a Juno Award for his 1984 effort, Making it Again, along with being made an honorary officer of the Order of Canada in 2013.

He was born in Arkansas, and he later became a major figure in the 1960s music scene in Toronto, Ontario, Canada.

He had a second career as an actor, appearing in such films as Heaven's Gate and Renaldo and Clara.

He recorded a hit song, Suzie Q, that was written by his musician cousin, Dale Hawkins.

Ronnie Hawkins Is A Member Of