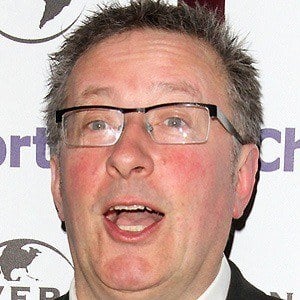 British comedian, writer and TV host who presented programs like Jammin' and Radio Rivron on BBC's Radio 2. He is also a successful drummer and has played with Jools Holland's Rhythm and Blues Orchestra.

He got his start in the industry when he was cast as Dr. Martin Scrote on The Last Resort, hosted by Jonathan Ross.

During the 1980s, he also played drums for the band Transvision Vamp. And starred in a children's TV series called Cat's Eyes.

He has three children with his wife Monica Appleby. And the couple released a cookbook together: The Caravan Cookbook.

He once performed a version of Norman Cook (aka Fatboy Slim)'s song Weapon of Choice on the show Let's Dance for Sport Relief.

Rowland Rivron Is A Member Of