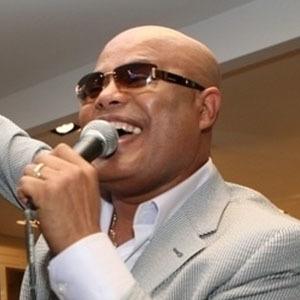 Merengue singer who first came to prominence as a member of Wilfrido Vargas' orchestra, where he performed hits like "El Africano" and "Cobarde Cobarde." He later became a famous solo artist in his own right, beginning with his debut album, Buscando Tus Besos (1987).

He was a talented baseball player growing up but was forced to stop after breaking his leg in a car accident. He later studied music at the National Conservatory of Santo Domingo.

He has received Globo Awards for Song of the Year and Album of the Year.

His parents are Modesta Herrera and Francisco Pérez.

He and Omar Enrique sang together on the song "Enamorado de Ella."

Rubby Perez Is A Member Of