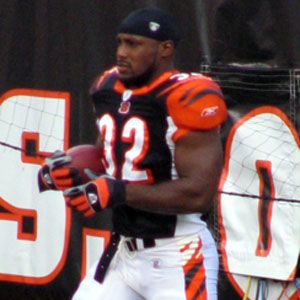 Retired running back who played nine seasons in the NFL, including eight with the Cincinnati Bengals. He enjoyed his greatest individual success in 2004, where he set a Bengals single-season rushing record and was selected to the Pro Bowl.

He attended Thomas Dale High School, where he excelled on both sides of the ball.

He was named SEC Player of the Year at Auburn University in 2000 and set a single-season record with ten one hundred-yard rushing performances.

He was born Burudi Ali Johnson, his middle name being an homage to legendary boxer Muhammad Ali.

He played alongside six-time Pro Bowl wide receiver Chad Johnson as a member of the Bengals.

Rudi Johnson Is A Member Of