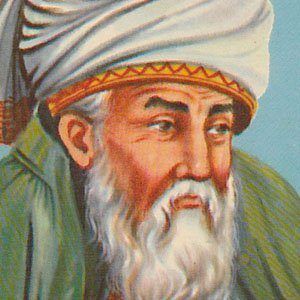 Persian poet and mystic of the thirteenth century who became famous for Mathnawi Matnawiye Ma'nawi and Diwan-e Kabir. His works of prose include Fihi Ma Fihi and Makatib.

He was born in what is present-day Tajikistan (the Republic bordering Afghanistan) to a scholar and mystic father, and he grew up immersed in the traditions of Sufism (mystical Islam).

He worked as a teacher until 1244, when he met Shams-e Tabrizi, a dervish. Tabrizi inspired Rumi to become an ascetic.

He came from a family of Muslim clerics.

He and prominent scholar Ibn al Haytham were important figures in Persian history.

Rumi Is A Member Of