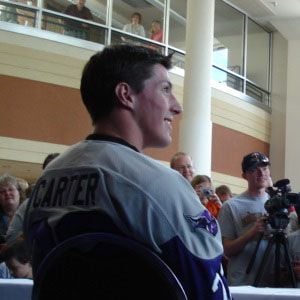 Professional hockey center who won the 2007 Stanley Cup Final as a member of the Anaheim Ducks. He also appeared in a Final with the New Jersey Devils in 2012.

He played for the Green Bay Gamblers of the United States Hockey League from 2001 to 2004 and was a Mr. Hockey finalist in 2002.

He received the New Jersey Devils Player's Player Award from his teammates following the 2013-14 NHL season.

He won the Stanley Cup alongside Ducks team captain Scott Niedermayer in 2007.

Ryan Carter Is A Member Of