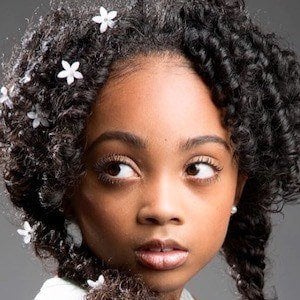 Actress who was cast as a series regular on Tyler Perry's The Paynes. Other credits of hers include Black-ish, No Good Nick, The Tyler Perry Show, Girl Meets World, Lab Rats Elite Force, Bizaardvark, and Little People.

She was crowned National American Miss's Miss California Junior Pre-Teen in 2015, Miss Personality in 2016, and Miss Teen Los Angeles/ Pasadena/San Bernardino, Junior Pre-Teen 2014. She has appeared in commercials for McDonalds and Samsung. She voices the character Treasure in the animated miniseries Whisker Haven Tales with the Palace Pets.

She is from Sherman Oaks, California. She lives with her dog Sasha Fierce and her mother Tanesia, who manages her career.

She appeared in the 2017 TV movie Beaches, which starred Idina Menzel and Nia Long.

No Good Nick
Diary of a Future President
Vampirina
More