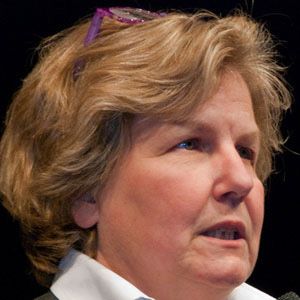 Writer and comedian who is the presenter of the BBC Radio 4's News Quiz and Channel 4's quiz show 1001 You Should Know. In 2012 she became the Chancellor of the University of Portsmouth.

She studied acting at Girton College, Cambridge University, where she became a member of the first all-woman show at its student-run theatrical club, the Footlights.

She has been a panelists on numerous comedy shows, and performed stand up on the opening of the Comedy Store in London.

Born in Copenhagen, Denmark, she spent much of her childhood in the U.S., before moving to the UK. She married Debie Toksvig in 2014 and she has three children: Jessica, Megan and Theo.

She attended Cambridge at the same time as Hugh Laurie, known to American audiences as Dr. House.

Sandi Toksvig Is A Member Of