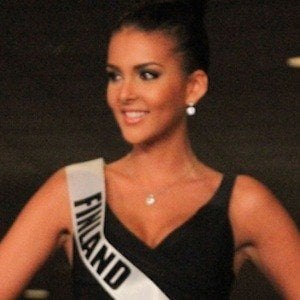 Finnish model who was crowned Miss Suomi 2012 and went on to represent Finland in Miss Universe pageant. The next year she competed on the Finnish version of Dancing on Ice, where she was partnered with Sasha Palomäki.

She first gained major attention by being crowned the first runner-up at the Miss Helsinki pageant.

She rapped on the remix for the JVG track "Sara Chafak" in 2015.

Her father is Moroccan and her mother is Finnish.

She competed to succeed Leila Lopes as Miss Universe in 2012.

Sara Chafak Is A Member Of