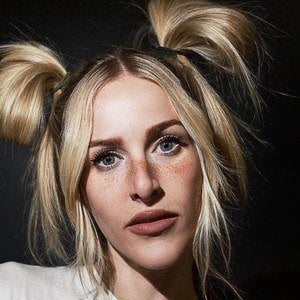 Also known by the stage name Sarah Sin, she is a Canadian singer-songwriter who joined the indie-rock band Walk off the Earth in 2012.

She was 27 years old when she had one of her first performances as part of the Psychobilly band The Creepshow, standing in for her pregnant sister Jennifer Blackwood. She would become a full time member of the band.

With Walk off the Earth, she has covered the Gotye song "Somebody That I Used to Know." She was featured on Volbeat's song "Lonesome Rider" from their 5th album Outlaw Gentlemen & Shady Ladies.

She and Walk off the Earth colleague Gianni Nicassio have three sons together named Luigi, Romeo and Giogio.

She began performing alongside Joel Cassady upon joining Walk off the Earth.

Sarah Blackwood Is A Member Of