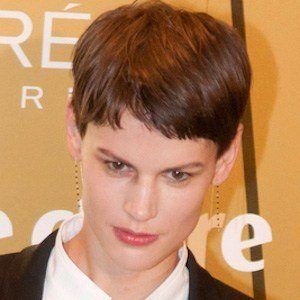 Dutch model who has appeared in numerous high-profile fashion campaigns for designers such as Givenchy, Versace, Chanel, Prada and Giorgio Armani, among others. She has also appeared on a number of magazine covers, including Carine Roitfeld's last edition of Paris Vogue.

She quit modeling at 16 to study photography and textile design at the Gerrit Rietveld Academy. She returned to modeling at 29 and was featured in two Vogue covers in the same month.

She has worked with top photographers including Riccardo Tisci, Steven Meisel and Karl Lagerfeld. She was ranked number 2 on models.com's Top 50 Models List.

She was born in the Netherlands into a family of lawyers.

She appeared alongside Tilda Swinton in the music video for David Bowie's 2013 single "The Stars (Are Out Tonight)" as one of the stars.

Saskia de Brauw Is A Member Of