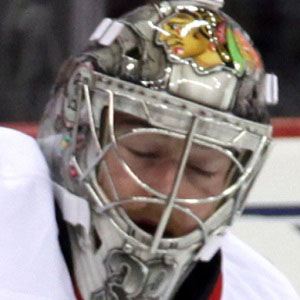 Goaltender selected by the Phoenix Coyotes in the 2007 NHL Entry Draft. He got his first NHL experience in the 2014-2015 season with the Chicago Blackhawks.

He began his professional career with the Chicago Young Americans of the Midwest Elite Hockey League in 2005. He also played for the North Iowa Outlaws of the North American Hockey League that season.

He spent time in the American Hockey League with the Wilkes-Barre Penguins, Hamilton Bulldogs and Milwaukee Admirals.

He was born in Newport News, Virginia and was raised in Lemont, Illinois.

He and Corey Crawford were both goaltenders for the Blackhawks during the 2014-2015 season.

Scott Darling Is A Member Of