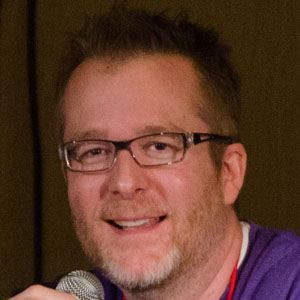 American cartoonist and designer who launched the audio production and illustration company Frog Pants Studios, LLC in 2008 and who illustrated the World of Warcraft Programming cover in 2010.

He started his career publishing the webcomic ExtraLife in June 2001.

His podcast AppSlappy started in 2009, and it was dedicated to reviewing Apple iPhone applications.

He has two daughters and a son with his wife, Kim.

Felicia Day has been a guest on his weekly award-winning podcast The Instance.

Scott Johnson Is A Member Of