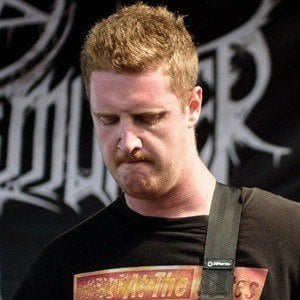 Guitarist and bassist for the deathcore band Thy Art Is Murder who played the latter instrument for the group between 2010 and 2014. He became the lead guitarist in 2014 again after previously filling that position from 2006 to 2010.

He was an original member of Thy Art Is Murder, joining Brendan van Ryn, Gary Markowski, Josh King and Lee Stanton to form the group in 2006.

His band's most successful album was 2015 Holy War which peaked at #7 on the ARIA Albums chart. It also charted in Germany and the US.

He is from New South Wales, Australia.

He previously played alongside CJ McMahon in Thy Art Is Murder.

Sean Delander Is A Member Of