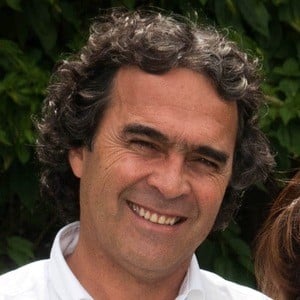 Colombian politician and mathematician who is best known for having served as the Governor of Antioquia from 2012 until 2016.  He is also known for his work as the elected Mayor of Medellin.

After attending the University of the Andes and the University of Wisconsin, Madison, his career in politics began in 2003 when he was elected Mayor of Medellin. In July of 2017, he announced his campaign run for President in the 2018 election. He finished third in the first round of elections.

He is also a published author and has written several books on math and politics including "Model Theory of Stochastic Processes" and "Medellin del miedo a la Esperanza".

He was born and raised in Medellin, Colombia and married Ana Lucrecia Ramirez.

He finished in second place of the Vice Presidential runoff campaign where he competed against fellow politician Juan Manuel Santos.

Sergio Fajardo Is A Member Of