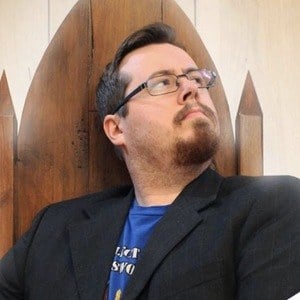 Writer and YouTuber who specialized in making content related to fantasy and medieval times, as well as science fiction, philosophy and all-hings swords. His channel Shadiversity has earned more than 1 million subscribers.

He created his channel with a username of shadmbrooks in August of 2013, but the oldest video in his library was from January of 2015 and called "Why swords are AWESOME."

He earned north of 2 million views each with videos titled "PROOF! drawing a SWORD from your BACK and why you would want to," "Why do medieval buildings overhang their low floors?" and "Female armor: Fantasy vs Reality.

He has made video content relating to the George RR Martin adapted HBO television series Game of Thrones.

Shad M Brooks Is A Member Of