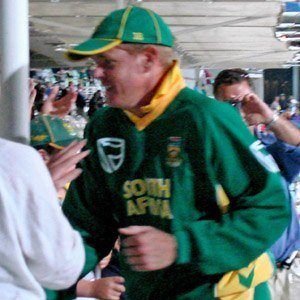 Bowling all-rounder who played Tests and ODIs for South Africa in the 1990s and 2000s, serving as Test and ODI captain in the early 2000s. He became the first South African to take 400 Test wickets in a career.

He began his professional career with KwaZulu-Natal in 1992. He made his Test debut in 1995.

He became the first number 9 batter to score two separate centuries. He scored more than 3,700 Test runs at an average over 32 to go along with 421 wickets at an average under 24.

His uncle Graeme and father Peter both played cricket professionally as well.

He bowled alongside Allan Donald while playing for South Africa.

Shaun Pollock Is A Member Of