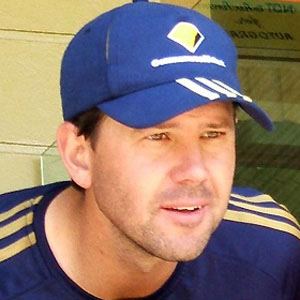 Retired batsman who captained Australia's Test team from 2004-2011 and its ODI team from 2002-2011. He represented his country in both formats for 17 years and finished with more than 27,000 total international runs.

He played on his first cricket team at age eleven. He made his Test and ODI debuts in 1995.

He became the first cricket player in history to win over 100 Test matches. He retired as his country's all-time leader in Test runs and centuries.

He married Rianna Jennifer Cantor in 2002. He has two daughters, Matisse and Emmy, and a son, Fletcher.

He appeared in 168 Test matches in his career, tying Steve Waugh's record for an Australian.

Ricky Ponting Is A Member Of