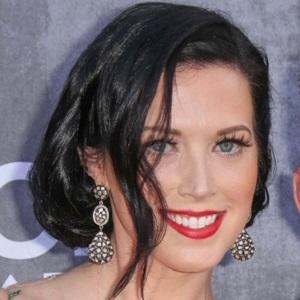 Part of the husband and wife country music duo Thompson Square along with her spouse Keifer Thompson. They have released a self-titled debut album as well as a 2013 album called Just Feels Good.

She met her husband at a singing competition in Nashville, Tennessee. She previously worked as a solo artist.

She and her husband won American Country Awards in the categories of Single by a Duo/Group, Single by a Breakthrough Artist, and Music Video by a New Artist. They also won Academy of Country Music Awards for Top Vocal Duo twice and a CMT Music Award for Duo Video of the Year.

She is from Chatom, Alabama. She and Keifer welcomed a son in January of 2016 named Rigney Cooper.

She is part of a country music duo like Tyler Hubbard of Florida Georgia Line.

Shawna Thompson Is A Member Of