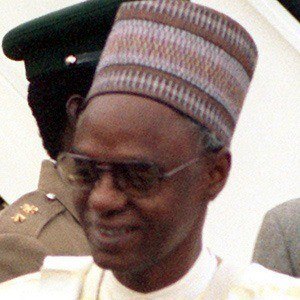 President of Nigeria's Second Republic from 1979 to 1983 who was accused of corruption before he was overthrown. He notably spent millions of dollars on several steel complexes.

He taught religious recitals at an array of primary schools.

He was overthrown on New Year's Eve in 1983 by General Muhammadu Buhari.

He was married to Hadiza and Aishatu Shagari. He had three children.

He and Abdulsalami Abubakar both presided over Nigerian governments, the latter being a military leader and taking control in 1998.

Shehu Shagari Is A Member Of