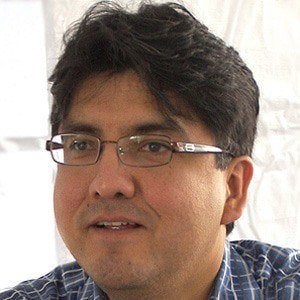 Native American novelist, short story writer, poet and screenwriter who won the National Book Award for his young adult novel, The Absolutely True Diary of a Part-Time Indian. His other award-winning works include Reservation Blues (1995) and The Lone Ranger and Tonto Fistfight in Heaven (1993).

He was born with a dangerous condition called hydrocephalus, and he survived brain surgery as an infant. He began his college career at Gonzaga University, but struggled with his pre-law and pre-med courses and eventually transferred to Washington State University, where he enrolled in a life-changing poetry class.

He grew up on the Spokane Indian Reservation in Wellpinit, Washington. He later had two sons with his wife, Diane Tomhave.

He wrote the screenplay for the 1998 film, Smoke Signals, which starred Adam Beach .

Sherman Alexie Is A Member Of