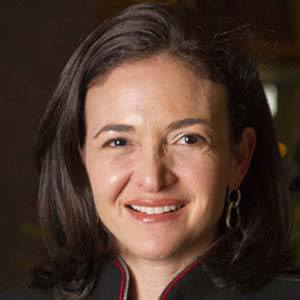 Facebook COO and former Treasury Department official within the Obama administration. She sparked a controversy about working moms.

She spent four years as Facebook's COO, guiding their company through their ballyhooed IPO and earning close to $1 billion in stock.

She became the inspiration for women seeking to have it all in successfully balancing the demands of motherhood and a high-powered career.

She was married for the first time at age 24 and divorced a year later. She married a second time to Dave Goldberg in 2004 and had two children.  Dave tragically passed away in 2015.

She and Kate Middleton, Britain's Royal Princess, were both named among Time magazine's most influential women of 2013.

Sheryl Sandberg Is A Member Of