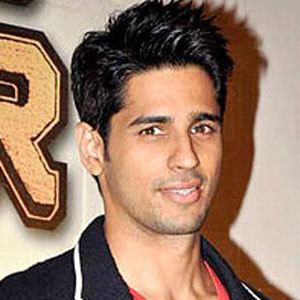 Known for his starring roles in such Bollywood films as Student of the Year, Ek Villain, and Hasee Toh Phasee, this popular Indian actor also had a career as a model, earning the 2010 New Delhi Television Limited (NDTV) Model of the Year award. His acting honors include a Stardust Award and a Filmfare Award nomination.

He began his brief modeling career shortly after his 18th birthday. He became involved in the film industry through assistant directing a 2010 drama film titled My Name Is Khan.

He appeared for two consecutive years on the Times of India's "Most Desirable Men" list.

He grew up in Delhi, India as the son of Sunil and Rimmi Malhotra.

He played the leading role in Student of the Year, acting alongside Alia Bhatt.

Sidharth Malhotra Is A Member Of