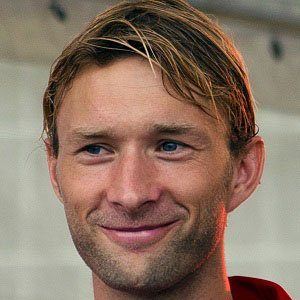 German midfielder who has found success as a member of Bayer 04 Leverkusen, of whom he became the captain in 2008. He debuted for the German national team in 2007 and finished as the runner-up at the UEFA Euro 2008.

He began playing for TuS Recke as a child in 1986 and did so until 1999, when he joined the youth academy of Werder Bremen.

He scored all three goals in a 3-2 victory for Leverkusen against VfL Wolfsburg after being down 0-2. He was named Man of the Match for his performance.

He married a woman named Jenny in 2009 and has a daughter named Liviva-Marie.

He has been teammates with fellow midfielder Lars Bender on the German national team.

Simon Rolfes Is A Member Of