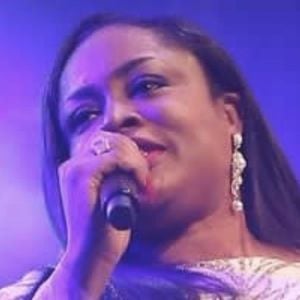 Internationally known gospel singer, songwriter and senior worship leader at Believers' Loveworld International who was the inaugural winner of the LIMA Songwriter of the Decade Award in 2016. She also won the African Achievers' Award for Global Excellence that year.

She was born Osinachi Kalu in Lagos, Nigeria. In 2008, her song "This Is Your Season" won the Song of the Year award.

Other accolades of hers include: Groove Awards' Western Africa Artist Of The Year and Top 100 Influential Christians in Nigeria.

She is the second daughter of seven children. She married Joseph Egbu in June 2014.

She joined Joyce Banda as a part of a prestigious list of recipients of the the African Achievers' Award for Global Excellence.

Sinach Is A Member Of