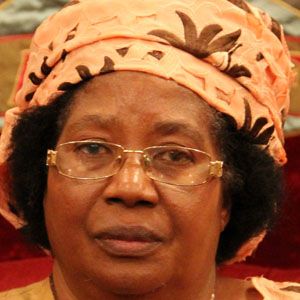 Politician and women's rights activist who became the first female President of Malawi in 2012. She founded the People's Party in 2011.

She was sworn in as president after the death of her predecessor Bingu wa Mutharika, and despite the best effort of the former president's close associates to install his brother at the top.

She was elected as the country's vice president in 2009 and she became one of the the president's most ardent critics, but he could not remove her from office.

Her sister was the CEO of the Raising Malawi Academy for Girls charity that was sponsored by .

Ellen Jonson Sirleaf, the president of Liberia, was the first female president in Africa, and worked together with Banda to help women on the continent.

Joyce Banda Is A Member Of