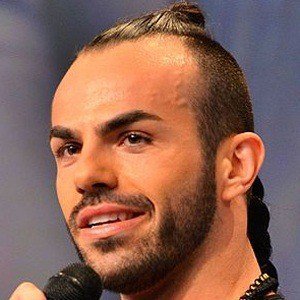 Actor and singer internationally recognized for representing Montenegro in the 2017 Eurovision Song Contest with the single "Space." He'd first gained popularity as a singer in 2013 competing on the debut season of X Factor Adria.

After graduating from Academy of Performing Arts at Cetinje, he became a member of the ensemble at Montenegrin National Theatre.

Some of his prominent acting roles include portraying Roman in the series Budva na pjenu od mora and starring in films like The Big Picture.

He was born in Titograd, Yugoslavia, or what is known now as Podgorica, Montenegro. He has one sister.

In the 2017 Eurovision Song Contest, he competed against winner Salvador Sobral and his sister's song "Amar pelos dois."

Slavko Kalezić Is A Member Of