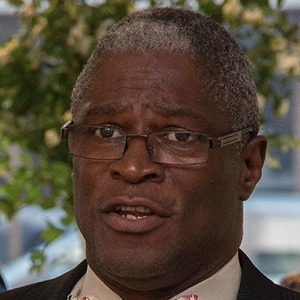 American politician who is best known for having served as the 54th mayor of Kansas City, Missouri. He is also known for his association with the democratic party and for starting his own law firm.

He joined the marines and later attended Rockhurst College in 1980 where he earned his degree in English. He then attended law school at Syracuse University College of Law. He then became the mayor of Kansas City in 2011.

He is known for having been the lead singer of the Amelia Earhart Memorial Flying Band later Manchester Trafficway which opened for Jefferson Airplane when they played in Kansas City.

He was born and raised in Kansas City, Missouri and married Licia Clifton. Together they have four children: Eric, Malik, Kyle, and Aja.

He is known for having complimented Barack Obama's role in preserving race relations within Kansas City.

Sly James Is A Member Of