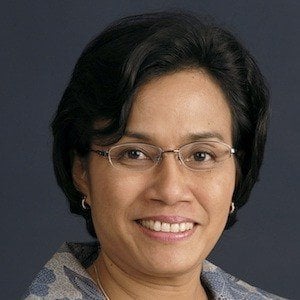 Best known for her work as the Minister of Finance of Indonesia. She is an economist who has worked alongside a variety of President's and Ministers in Indonesia.

She graduated from the Universitas Indonesia in 1986. She then received her master and doctorate in economics from the University of Illinois at Urbana-Champaign in 1992. In 2001, she left for Atlanta, Georgia, to serve as a consultant with the US Agency for International Development for programs to strengthen Indonesia's autonomy. She then returned to Indonesia to execute her training.

In 2014, she was ranked as the 38th most powerful woman in the world by Forbes magazine.

She was born and raised in Tanjung Karang, now called Bandar Lampung, in Lampung, Sumatra. Her parents Satmoko and Retno Sriningsih were both University lecturers. She married fellow economist Tony Sumartono and together they have three children.

She was appointed to Minister of Finance by President Joko Widodo.

Sri Mulyani Indrawati Is A Member Of