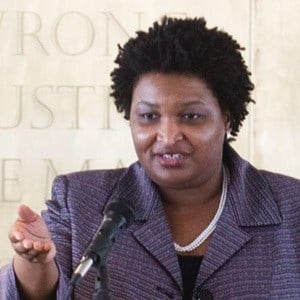 Well-renowned politician who became the Democratic nominee for Governor of Georgia in 2018 in a tight race that led to Republican Brian Kemp declaring victory before all votes were counted. She was the first black female major party gubernatorial nominee in the U.S.

She was named the Deputy City Attorney for Atlanta at age 29.

She served as minority leader of the Georgia House of Representatives from 2011 to 2017.

Her parents, both reverends, are named Carolyn and Robert.

She was endorsed by Oprah Winfrey in the 2018 gubernatorial election.

Stacey Abrams Is A Member Of