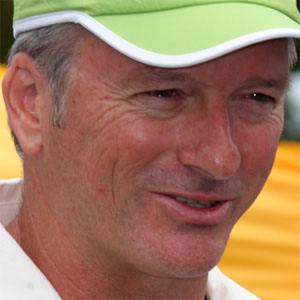 Former Australian Test and ODI captain who earned a reputation as a ruthless and efficient player and leader. He was part of the Australian teams that won 16 consecutive Test matches, serving as captain for 15 of them.

He made his professional debut with New South Wales team during the 1984-1985 season. He made his Test debut in 1985.

A notable philanthropist as well as a cricketer, he was named Australian of the Year in 2004. He finished his Test career with more than 10,000 runs at an average over 51 as well as 92 wickets at an average around 37.

His fraternal twin, Mark Waugh, also had a career as a cricketer, as did the twins' younger brother, Dean Waugh.

He retired after playing in 168 Test matches, an international record. The mark was later broken by Sachin Tendulkar in 2010 and matched by Ricky Ponting in 2012.

Steve Waugh Is A Member Of