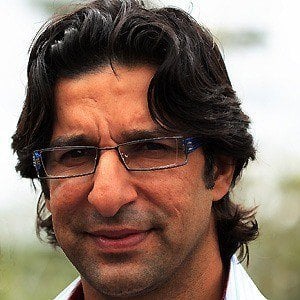 Former Pakistani fast bowler who took 414 Test wickets in his career, most all-time for his country. He was inducted into the ICC Cricket Hall of Fame in 2009.

He made his professional cricket debut with the Pakistan Automobiles Corporation in 1984. He made his ODI debut that same year and earned his first Test cap in 1985.

He retired with an impressive four international hat-tricks, two in Tests (taken nine days apart) and two in ODIs. He won 17 Man of the Match awards in his career.

He had two sons, Tahmoor and Akbar, with his first wife Huma Akram. He married his second wife Shaniera Akram in 2013.

He became the first player to take 500 ODI wickets, retiring with 502. He was joined, and eventually surpassed, by Muttiah Muralitharan.

Wasim Akram Is A Member Of