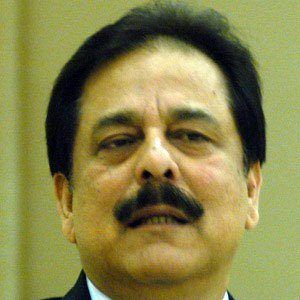 Indian businessman, founder, and Chairman of Sahara India Pariwar. He was also the owner of Pune Warriors India and London's Grosvenor House.

He studied Mechanical Engineering at the Government Technical Institute and started his first business in Gorakhpur.

He was named as one of the 10 Most Powerful People of India by India Today.

His parents were Sudhir Chandra Roy and Srimati Chhabi Roy.

He became the owner of the Pune Warriors India cricket team for which all-rounder Abhishek Nayar had played.

Subrata Roy Is A Member Of