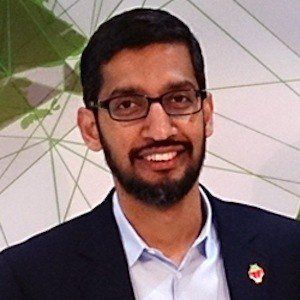 Business executive who was named CEO of Google in August 2015. He joined Google in 2004, and led the product management and innovation efforts for many software products, including Google Chrome, Chrome OS, and Google Drive.

He has multiple degrees from prestigious universities in both India and America; among them, he has an MS from Stanford University in Material Sciences and Engineering, and an MBA from the Wharton School of the University of Pennsylvania.

His full name is Pichai Sundararajan, and he was born in Madural, India. He met his wife Anjali in college, and the couple has two children.

Google was co-founded by Larry Page.

Sundar Pichai Is A Member Of