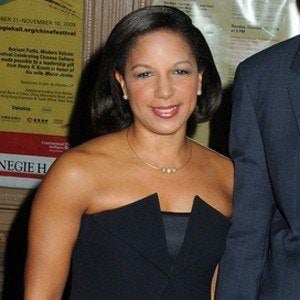 The 27th United States Ambassador to the United Nations from 2009 to 2013 who became 24th National Security Advisor the year she left that post.

She graduated from Stanford University in 1986 with a BA in History after receiving a Truman Scholarship.

She was a frontrunner to replace Hillary Clinton as Secretary of State in 2013, but withdrew her name due to the controversy over the 2012 Benghazi attack.

She has two children with her husband Ian Officer Cameron.

Madeleine Albright was a mentor to her within the Clinton Administration.

Susan Rice Is A Member Of