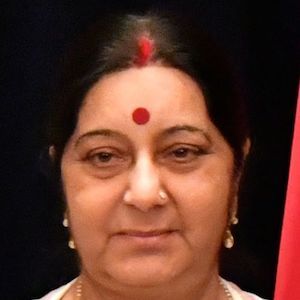 Indian politician and former Supreme Court lawyer. She was a senior leader and former president of the Bharatiya Janata Party.

At the age of 25 in 1977, she became the youngest cabinet minister of north Indian state of Haryana.

She's served as the Minister of External Affairs of India and was the second woman to hold the office.

In 1975, she married Swaraj Kaushal, a peer and fellow advocate at the Supreme Court of India, and they had a daughter named Bansuri.

Indira Gandhi was the first woman to hold the office of Minister of External Affairs.

Sushma Swaraj Is A Member Of