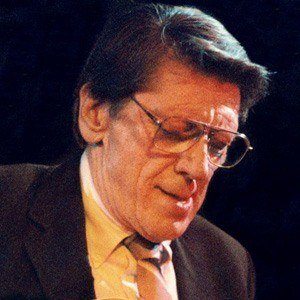 Jazz guitarist known by the nickname Octopus because of his large hands and who released more than thirty albums.

He did not begin playing guitar until he was twenty-one years old, but was playing professionally within a year.

He was survived by family members when he died of esophageal cancer in 1998.

He was a contemporary of Chet Atkins and nearly as influential.

Tal Farlow Is A Member Of