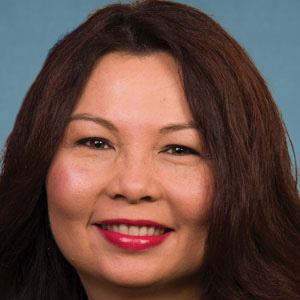 American politician and Democrat who was a member of the U.S. House of Representatives for Illinois' 8th district from 2013-2017. In 2017, she became a U.S. Senator for Illinois.

She moved to Hawaii when she was sixteen and earned a Bachelor of Arts in Political Science from the University of Hawaii in 1989.

She served as a U.S. Army helicopter pilot in the Iraq War and suffered severe wounds, causing her to lose both her legs and suffer an injury to her arm.

In 1993, she married officer and Iraq War veteran Bryan Bowlsbey. They welcomed a daughter in 2014.

She has worked and served in office alongside fellow democrat, President Barack Obama.

Tammy Duckworth Is A Member Of