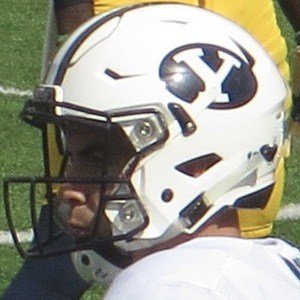 Recruited to play quarterback for Brigham Young University as a four-star by Rivals.com, he would play almost the entirety of the 2015 season after starter Taysom Hill went down with an injury in the team's first game.

He broke all of Eagle High School's quarterback records his senior year. In the Under Armour All-America Game, he unselfishly switched to the losing team after said team was down to just one quarterback, earning him a special recognition MVP.

He was gray shirted his first year at BYU and would spend the next two years doing Mormon missionary work in Chile before returning to the school in 2015.

He was born in Eagle, Idaho to parents Michael and Karen. His brother Madison played wide receiver at Idaho State and his sister Meredith played soccer at Boise State. His brother Parker also played for BYU.

He played under offensive coordinator and former BYU Heisman winner Ty Detmer while at the university.

Tanner Mangum Is A Member Of