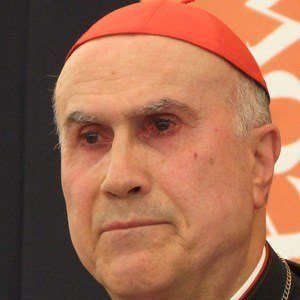 Italian cardinal of the Catholic Church and Vatican diplomat who, during his career, was the Archbishop of both Vercelli and Genoa.

He served as a professor of Special Moral Theology at the Pontifical Salesian University from 1967 to 1976.

He served as Camerlengo from the time of Benedict XVI's resignation up until the election of Pope Francis.

His mother was an anti-fascist militant of the Italian People's Party.

He was elevated to cardinalate by Pope John Paul II in 2003.

Tarcisio Bertone Is A Member Of